"His enemies were ahead of us. They dispatched an army of flaming little buggers called FIRE FLYERS to keep the orbs away from Omegaton."
― Zephyr's comment towards the Fire Flyers[src]

Fire Flyers are small rambunctious fire elementals, who have the ability to possess any living or non living objects.

Wreaking havoc on two worlds might make the Fire Flyers seem evil by nature but maybe they're just misunderstood. They are mischievous little buggers with no capacity to understand the consequences of their actions. To them the incursion of Earth is nothing more than an endless game of hide and seek, but their actions on Earth cause more chaos and challenges for our unlikely hero than he'd hope for. Fire Flyers posses important powers which is why Zephyr needs to find them, collect them and ultimately destroy them.

When Omegaton was sent from his dimension into ours, he brought with him a squad much like the Wind Warriors called the Fire Flyers. They are doing everything they can to prevent Omegaton from retrieving his orbs and returning to his own universe.

When you are near an object they are hiding in, you may hear a glittering sound. They scream when captured; this lets you know you're holding them and can help you time your Fire Flyer chains. 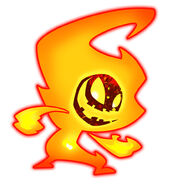 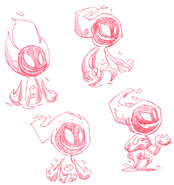