"The legendary leader of The Wind Warriors. Respected and respectful, he's a fount of Wisdom and Knowledge accumulated over thousands of years leading the squad."
― Nimbus's bio in the Tornado Outbreak Comic[src]

Captain Nimbus, formally known as lieutenant Nimbus is a skillful air elemental and formal leader of a squad of Wind Warriors

Once the fearless leader of the Wind Warriors, he is now the wise leader second in command. Nimbus stands strong beside his protégé Zephyr passing on the knowledge and abilities he's learned over the years.

Nimbus also possesses an innate ability for mechanical know how which is invaluable to the existence of his team. His ability to calibrate and decipher the L.O.A.D. STARR which provides cloud cover on Earth and allows his sidekick Zephyr to possess his destructive abilities are vital to their mission.

However, fearing that Cyclone will betray the Wind Warriors, both Nimbus and Stratos form a plan to catch him in his tracks. The plan involved Nimbus faking being crystallized by Shades, toxic elementals that crystallize anything they touch, and pretending to host a competition to see who will become the new leader. The plan begins to work as plan until Cyclone sabotages the competition by poisoning Stratos which led to him being unable to win any of the competitions.

Upon discovering that Nimbus' fear was true, he breaks out of the crystallized shell which turned out to be ice created by himself.[1]

Over the course of the game, Nimbus plays a role in teaching Zephyr how to grab Fire Flyers with the Grab Move, calibrating the L.O.A.D. STARR along with guiding the squadron of Wind Warriors. However, an ambush from the Fire Flyers left him wounded and unable to move. He passes the L.O.A.D. STARR onto Zephyr and orders him and the squad of Wind Warriors to move out and retrieve the rest of Omegaton's orbs.

The Fire Flyers explained to Nimbus about what Omegaton really was, a hero from the backwards dimension is actually a villain on Earth. In return for listening, the Fire Flyers placed him inside of an underground sanctuary to prevent him from the sun's deadly exposure.

Eventually, Nimbus, along with Zephyr and the squadron of Wind Warriors defeat Omegaton once and for all and reunite the rock and water elementals to their homeworld.

Even though Nimbus isn't a playable character, he has slightly more dialogue then Zephyr and the Wind Warrior. 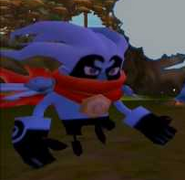 Nimbus being sucked into Zephyr's tornado to be then thrown.

Nimbus in the sunlight. 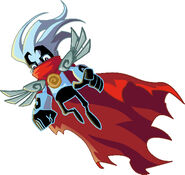