"The greatest hero of a strange, backwards dimension that he described as an anti-matter universe--whatever THAT is....."
― Zephyr's comment about Omegaton in The Secret Origin[src]

Roadside Destruction!
(cutscene only)
Coastal Calamity!
(cutscene and boss only)
Showdown with Omegaton!

Omegaton is the anti-matter being and final boss in the level Showdown with Omegaton! He first appears in The Tornado Outbreak Comic.

Omegaton's body has a layer of dark purple armor. On Earth, Omegaton has an orange layer protecting his armor. His body has a total of six orbs on his body.

Once the greatest hero of his universe, until his enemies joined forces and exiled him to another universe. Omegaton has been slowly dying after being stripped of his orbs of power and without them his fate is sealed to a cosmic grave. Dispersed somewhere on Earth, the Wind Warriors lead by Zephyr have been tasked to help find his sources of power through Omegaton's deceptive coercion. The story will reveal that all that's known about Omegaton may not be true and his mission is not what it seems.

Omegaton, once a powerful brute was outnumbered and render powerless by his enemies. He was stripped of his six orbs of power and banished to our universe.

Upon being discovered by Zephyr, Nimbus, and the Wind Warriors, Omegaton begs for them to find and return his six orbs that were stranded on Earth. To help the Wind Warriors on their mission, he provided the L.O.A.D. STARR, a device used to create cloud cover for the Wind Warriors to protect them from the sunlight.

Later in the game, it's reviled that Omegaton is from an anti-matter universe; a hero in space is a villain on Earth. In the final level, Zephyr proceeds to pummel and pounce onto Omegaton;eventually killing him in the process.

Omegaton seen with all of his orbs of power. 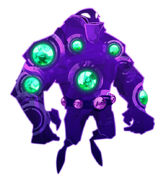