Note: This page is currently being rewritten. 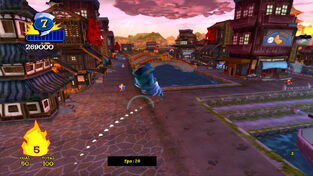 The ability to toggle the game's framerate was an option only featured in the development builds of Tornado Outbreak.

Similar to the Totem battles, the player locks onto an object with the Z button while shaking the Wii remote left and right to enter a mini game called BATTER-RAM. 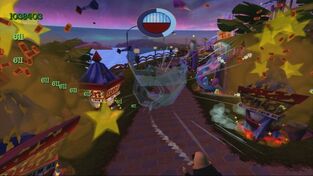 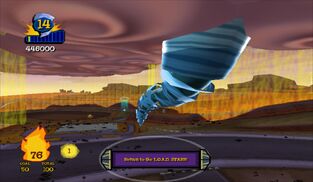 Within the game's files, there exist unused animations for the size 33 tornado. The tornado's movement is slower then the previous tornadoes.

Several buildings/structures ended up being completely removed, or just renamed.

Note: Concept Art in Bold is not included in the final game.

Below are a list of characters or concepts that were never added in the game, or was just left as concept art.

Note: Lines that are in italics do not have a 16x9 variant.

Three unused cutscenes can be found in the game's movie folder. These cutscenes were later removed in the Xbox 360 and PlayStation 3 version of Tornado Outbreak.

In earlier versions of Tornado Outbreak, the ability to toggle the advanced chain collecting mode could've been enabled with the press of a button. This ability would completely remove any smokes and sparks appearing from any objects, along with the removal of the Fire Flyers' sizzle sound effect.

The Fujita Frenzy was a power-up that would've been activated once the player collected a specific amount of humans hiding in specific buildings. The power-up would increase the player's tornado size and allowed the player to destroy larger buildings.

An unused track from the level Showdown with Omegaton. 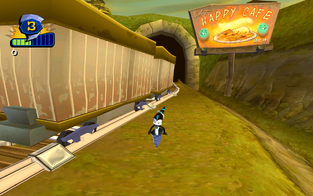 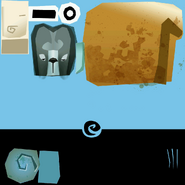 Textures for the unnamed Wind Warrior.

Unused sprite for the Nunchuk. Presumably, this was going to be used during the Totem Battles.

Placeholder text telling the player to shake the Wii Remote.

Placeholder text telling the player to rapidly press a button on the controller.