"A noble group of Air Elementals appointed with the task of creating atmosphere on barren worlds across the universe. If life exist on any given planet, it's because at one point in its distant past, The Wind Warriors did their jobs well, creating an environment where it could flourish and prosper."
― The Wind Warrior's bio in the Tornado Outbreak Comic[src]

The Wind Warriors, are air elementals tasked with providing atmosphere to barren planets. They originate from their homeworld Harmonia. Much like Nimbus, all Wind Warriors are left handed.

All soldiers are light blue and wear a belt, a red cape, studded gauntlets, and golden galea helmet with two ornamental wings on the sides. Without their helmets, they have two black eyebrows and two small pieces of hair on their head.

Wind Warriors are quiet, calm Air Elementals that are given the task of creating atmosphere on lifeless planets. They are trained soldiers from the Academy of Air, a school made for training Wind Warriors/Air Elementals to mastering the tornado. Their helmet's appearance depends on the current rank they are.

They are the unnamed, fearless and elite squad that stands proudly behind their leaders Nimbus and Zephyr. The Wind Warriors' sole purpose is to lend support to whatever mission the leaders deem necessary. Later in the story, the Wind Warriors become an integral tool in the ultimate defeat and destruction of their earthbound nemesis Omegaton. Without the Wind Warriors, Zephyr and Nimbus would be nearly defenseless.

Much like Zephyr, the Wind Warrior doesn't have alot of in-game dialogue. 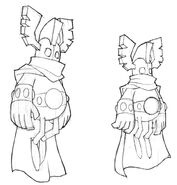